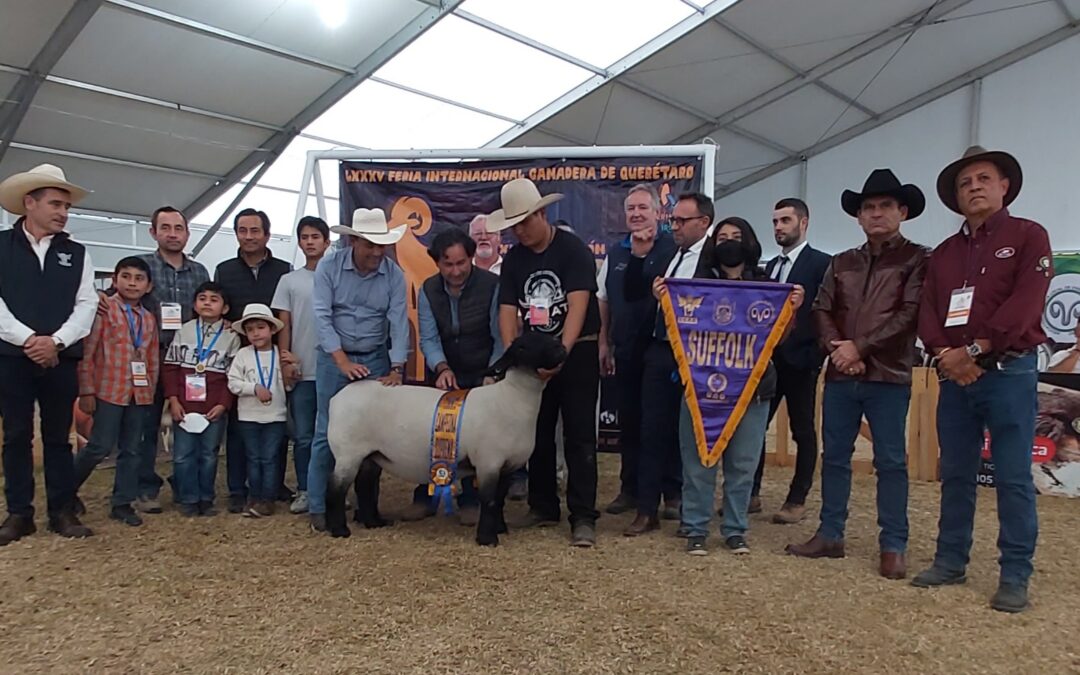 There are many places an Irish Suffolk sheep breeder might expect to be in mid December, but Mexico would not be one of them! After receiving an official invitation from the Mexican National Sheep Breeders Association to judge the Suffolk Breed in their National Show in Queretaro (which is a city about 3 hours north of Mexico City with a population of just over 1 million), I was very much looking forward to seeing the best of Mexican Suffolk Sheep Breeding on show.

‘Feria Internacional Grandera de Queretaro’, as a show is similar in style to the likes of the Ploughing or Balmoral Show but it runs for three weeks, encompassing stock judging, rodeos, equine displays, police and army displays, a circus, concerts, retail halls, food halls and shows to mention but a few of the things which happen over its duration.

On arrival at the judging venue on Thursday December 8th (after 25 hours of travel) there was a very warm welcome from the organisers of the Ovine event – Jose Luis Cervantes (President of the Sheep Breeders Association and Juan Jose Salas, Ovine event Chairman.

With little knowledge of what to expect in terms of quality, and only some reports of more ‘leggy, lengthy sheep with smaller heads and overall, a different type of Suffolk’, I was very much looking forward to judging this extremely prestigious show. The actual grounds were huge with football pitch size marquees. As judge however, I was not allowed to enter the sheep area where all the breeds were penned, prior to judging taking place.

Several breeds were judged prior to the Suffolks, including Charollais, Texels, Dorpers as well as eight other breeds, many judged by other international judges from Europe and South Africa. The Suffolk judging took place on the Saturday. All animals entered to the show were brought to the judging ring and tethered just outside the ring to await their turn to be shown. It was with great delight that I saw a large number of quality Suffolks, who would have made the cut for any of the show circuits in Ireland.

Warm weather and good grass obviously agree with the sheep as they displayed super carcasses, great bone and generally, very good toplines. There were a small number of teeth problems but these were in the minority, but conformation was generally very good., in particular in several young lambs who were judged in groups dependent on age.

A smashing young Ram Lamb with great style, carcass and bone, from the flock of Jose Luis Cervantes took the Male Champion and the same flock produced the Female Champio nwith a superb Shearling who turned out to be a daughter of Solwaybank Major and early in lamb to a South of Ireland, Irish Suffolk Ram, Malinhead Geras.

Unlike the system here in Ireland and the UK, the only information you receive about the animals being judged is their tag number, Flock and age. No breeding information is given to the judges prior to judging. The other difference is that there is not Supreme Champion judging – there are only Male & Female Champions. Flock genetics are also judged in Classes with groups of three & four animals (male or female) from the one family.

The Super Female Champion went on to be judged in the Interbreed Competition on the Sunday against the Female Champions of all the other breeds. This competition was judged by a panel of five judges from France, Ireland, South Africa and Mexico who each had to vote to pick their Champion. To the delight of the large crowd in attendance (and myself I might add) the judges unanimously picked the Suffolk as their Interbreed Champion of the Show.

Once the Show judging was complete, the Mexican Sheep Breeders Association hosted a banquet in the transformed judging marquee for about 500 sheep breeders present at the event with a presentation of prizes and speeches after the meal.

I would very much like to congratulate the organisers of this fantastic event which was extremely well organised and ran without a hitch and to thank them for the wonderful opportunity to judge at the Show. As a fellow Suffolk Breeder it was a tremendous experience to attend such a prestigious event and to see the excellent quality of the sheep being produced in Mexico. It was also wonderful to see Irish & UK genetics breeding so well within Mexican Suffolk Flocks. I felt that there is a real understanding  by the breeders in Mexico of Suffolk genetics and the importance of maintaining and improving their bloodlines for the development of the breed. The Suffolk breed in Mexico has a very bright future indeed with such forward thinking and insightful breeders developing the National Suffolk Flock.

Thankyou to all concerned for the fantastic experience and the opportunity!